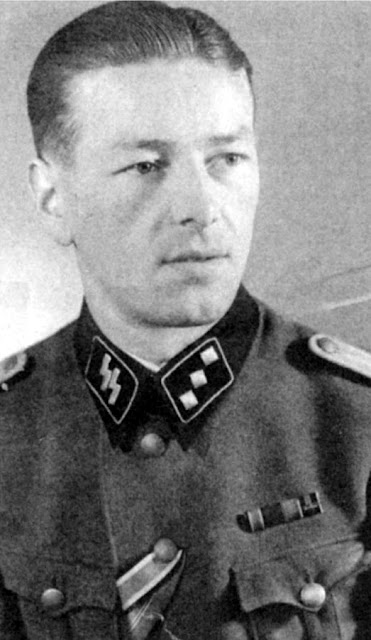 Karl Weyand was born on 31 July 1914 in Dillengen, Saar. From November 1935 until March 1938 he served with the SS-VT Standarte “Deutschland” in Ellwangen. In May 1938 he became a company clerk in the SS-VT Standarte “Der Führer” at the Radetzky Barracks in Vienna. From the beginning of the war until at least January 1944 he participated in all of the combat actions of the “DF” Regiment on the Western and Eastern Fronts. The next few months are a blank but by November 1944 he was again stationed at the Radetzky Barracks in Vienna. On the 21st of February 1945, SS-Hstuf. Weyand was transferred to the 36th SS Grenadier Division, (formerly the “probationary” SS-Sturmbrigade “Dirlewanger”). It is not known if this was a legitimate posting or done for “punishment” purposes, although at this time plenty of “normal” (i.e. not convict) personnel were now being added to strengthen the new division. Weyand’s last letter home was posted from Senftenberg / Niederlausitz on 23 March 1945. In April 1945, the 36th SS Division was caught up in fierce retrograde fighting and ended up in the so-called “Halbe” Pocket. It is presumed that SS-Hstuf. Weyand was killed during this time, although he remains missing-in-action.