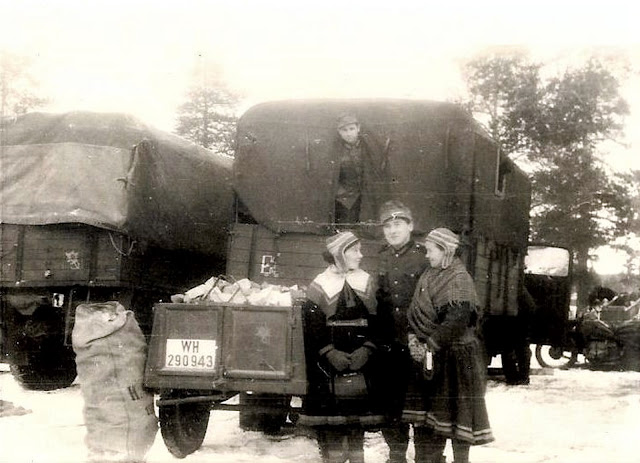 A Gebirgsjäger (mountain ranger) posing together with a couple of young Sami women (in traditional clothing), Finnish Lapland, probably the winter of 1941-42. The truck to the left and the trailer carry the Edelweiss flower emblem of the 6. Gebirgs-Division. The other truck has the tactical sign of a mountain ranger motorized signals company vehicle. The firewood on the trailer and in the sack will be welcome in the sub-Arctic cold. It might appear strange that at least four mountain ranger divisions were sent to the Finnish Lapland front, as the tallest mountain in that part of Finland is Korvatunturi (486 meters/1594 feet over the sea), which to people raised in the Alps is nothing more than a speed bump. The reason was that they were considered experts in winter warfare, but as their Finnish brothers-in-arms were under diplomatic pressure to not launch any major offensive on the port city of Murmansk or the railroad carrying supplies to the south, the front was relatively quiet for long periods of time. A little-known fact is that Sweden allowed the Germans to use a couple of large warehouses outside the port of Luleå for storing supplies (mostly foodstuff) for the troops in Norway and Finland. They were destroyed in a fire in 2016. 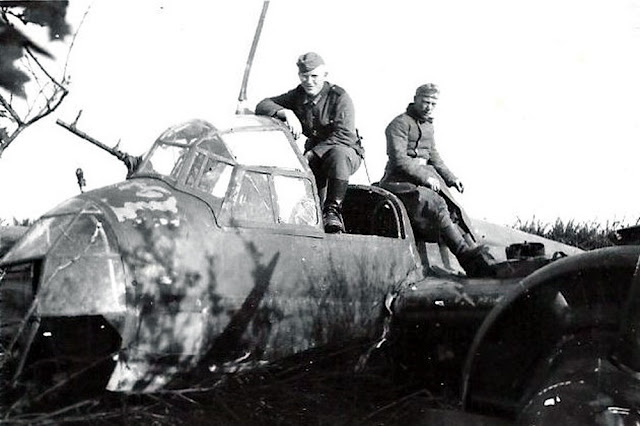 A crash-landed Junkers Ju 88, probably an A-4. The Ju 88 was a twin-engined multirole combat aircraft, which turned out to be one of the most versatile and successful airplane designs of WW2. This one didn’t enjoy much success, though, but at least the crew had a decent chance of walking away from the wreck. The Ju 88 saw service in many different version, like a bomber, dive bomber, radar-equipped night fighter, torpedo bomber, reconnaissance aircraft, heavy fighter, and even flying bomb. In 1943, 105 Ju 88 A-4s were used in the attack on the port of Bari, one of the most succesful Luftwaffe attacks of the war, resulting in the sinking of 28 Allied ships. The Germans lost just one aircraft in the raid. One covered up effect of the attack was the release of mustard gas, which was carried on one of the sunk US ships, injuring hundreds of sailors, medical personnel and civilians, killing at least 83. One of the reasons the presence of chemical weapons was hushed down was that the Allies didn’t want the Germans to consider using gas on the battlefield. Hitler, who had been a victim of a gas attack during WW1, opposed its use (one of the few moral things he did), and if it had become known that the Allies had a ship full of artillery gas grenades, he might have reconsidered that decision. Only two complete Ju 88s have survived the war. I’ve seen one of them, which is kept at the RAF Museum in Hendon, just north of London. The museum is a must to visit if one has an interest in combat aircraft of the 20th century.

In the Skies Above Paris 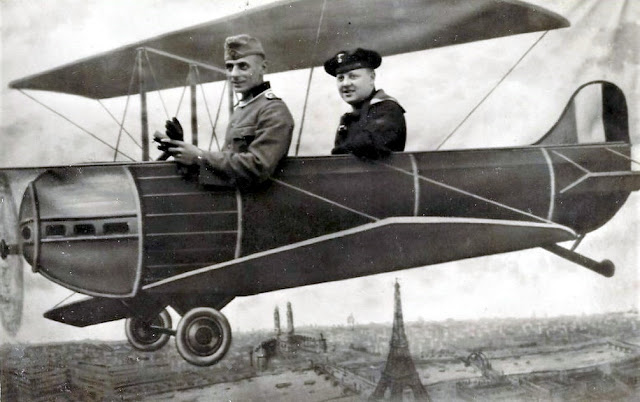 In the skies above Paris… Not really. An army Unteroffizier and his navy buddy have their photo taken in a studio in Paris, 1940. I have seen this very set used in at least one more photo, so I guess it was a rather popular souvenir back then. Those were the happy days being a German soldier. Sure, at least 27,000 of them had been killed in the Battle of France, but the campaign was short and triumphant, and the humiliation of the defeat in 1918 paid back. The war against the Soviet Union was a year off in the future, and instead the German soldiers could enjoy occupation duty in France. There were plans and preparations for the invasion of Britain, Operation Seelöwe, but while the Luftwaffe fought in the skies over England, soldiers on leave had a fun time in Paris. A year and a half later, many of them would be freezing to death on the Eastern Front… 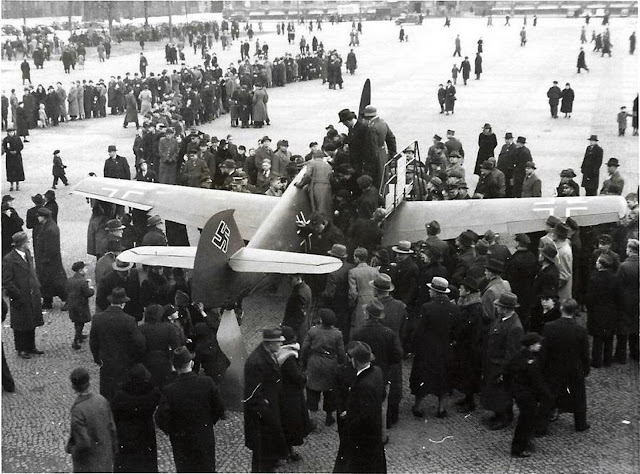 Curious German civilians crowd around a Messerschmitt Bf 109, probably an E-1, patiently waiting in line to get a chance to take a look in the cockpit. It’s apparently a publicity stunt, showing the people that Germany possessed some of the finest fighter aircraft in the world. The all-metal construction, powerful engine, and, starting with the E-3, improved armament made it a respected adversary on all fronts. The Bf 109 was the mainstay of the Luftwaffe, serving in different versions during the entire war. 33,984 were built between 1936 and 1945, making it the most numerous fighter aircraft in history. It was the mount of aces like Adolf Galland, Hans-Joachim Marseille, Gerhard Barkhorn, Günther Rall, and the ace of all aces: Erich Hartmann, who with his 352 aerial victories will probably never be bested. Today, just a few original Bf 109’s are in flying condition. The roar of their Daimler-Benz engines can still be heard at some airshows, and I hope to see one in the air sometime before I die! 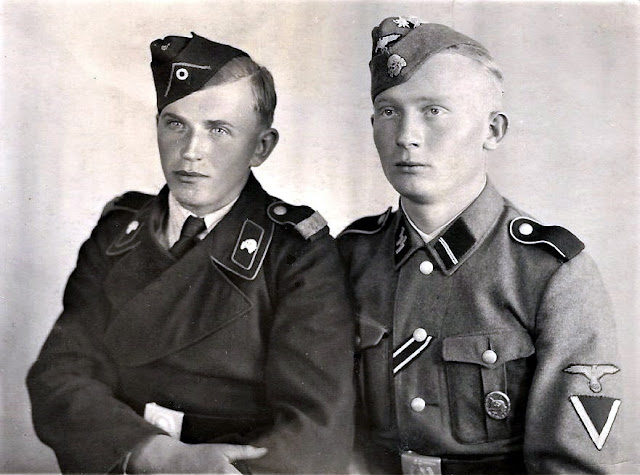 This studio portrait of two young soldiers, who I presume are friends, contains some interesting details, a couple of enigmas, and some historical background. My guess is that the photo was taken in 1941 or 1942. The Place is the small town of Dürnholz, since World War II known as Drnholec in Moravia in the Czech Republic. The young men are most likely Sudeten Germans, the Volksdeutsche – ethnically German – population of western Czechoslovakia that the Nazi government in Germany used to further their territorial claims. When the war was over, Czechoslovakia was ethnically cleansed, the Sudeten Germans forced to flee to the zones under Western Allied administration. The Soldat on the left is a Panzer crewman. He wears the black side-buttoned tunic typical of the Panzer crews. His collar tabs sport the silver skulls of the armored troops. Those had their roots in the skulls worn on the headdress of Napoleonic-era Prussian Hussars, symbolizing the do-or-die attitude of the daring cavalrymen. Many Panzer divisions were mechanized cavalry units, changing horses for tanks and armored cars. His shoulder straps are partially covered by slip-on fabric loops used to obscure the regimental number. This was done for operational secrecy, but there’s the possibility that his regiment is one of those that use differently-colored loops to differentiate between the battalions. His black sidecap indicates that the photo is taken after 1940. His friend is a Waffen-SS Sturmmann (lance corporal) of some experience, implied by his Iron Cross, 2nd class, ribbon and the silver Wound Badge. He’s a member of a Waffen-SS division, but as his cuff title isn’t visible, it’s impossible to tell which one. One intriguing detail is the Edelweiss flower tucked in his cap. It’s a real flower, and not the embroidered patch of the SS-Gebirgsjäger mountain rangers. It obviously has some personal meaning, as it wasn’t an official feature of the uniform. The skull on his cap is the SS version, which symbolizes the willingness of the SS soldiers to die for the Reich. It wasn’t uncommon for Panzer crewmen to be confused with SS troops because of the skulls and black uniforms. If they were taken prisoner, they ran the risk of being shot straightaway, as both western Allied and Soviet troops thought they were SS soldiers. One can but wonder about the final fates of the two young men in the photo. 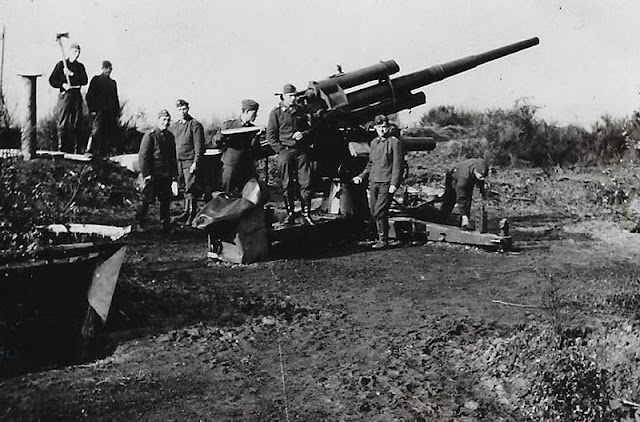 One of the most well-known guns of World War II was the 8.8 cm Flak 36 anti-aircraft gun, often referred to as the “Eighty-eight” or German “Acht-acht“. It had its origins in World War 1, but the versions that saw action during WW2 were developed in the 1920’s and 30’s. During the Spanish Civil War, it was discovered that the gun was very effective against vehicles, tanks and other ground targets. It was mobile, but required an Sd.Kfz.7 half-track tractor to pull it. It could fire a 9.4 kilo grenade to an altitude of 9900 meters, posing a serious threat to Allied bombers. Used as an anti-tank gun, it could knock out most tanks at a range of up to 2 kilometers. The 8.8 cm gun was also the basis for the main gun of the Tiger tank, one of the most feared tanks of World War II. In the photo, eight of the 11-man crew are visible. Flak batteries were operated by the Luftwaffe, and the stationary batteries defending German cities were often crewed by boys aged 15-16 years old. One of many ironies of the war was that many of the crews serving these powerful guns weren’t old enough to buy a beer.

Germans in White Camo in Positions 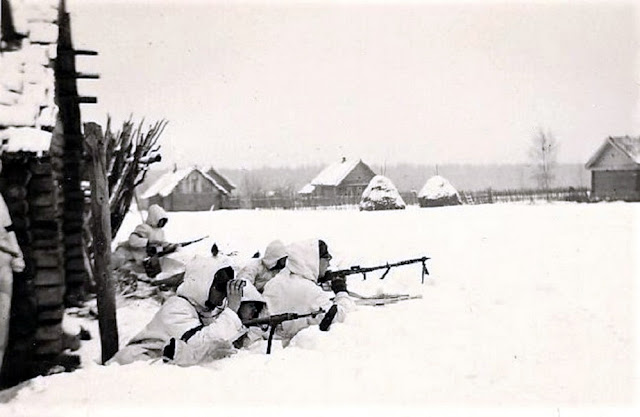 A squad from III. Abteilung, Armee-Nachrichten-Regiment 501 in positions in a Russian village during the winter of 1942-43. Part of the 16th Army, Army Group North, it spent most of the war on the northern part of the Eastern Front. The Soldiers are armed with an MP 38 submachinegun, an MG 34 machinegun, and Kar 98k carbines. Wearing reversible snow suits, they are better equipped for the winter than a year ago. The Germans used black and red armbands buttoned to the upper half of the sleeves for recognition purposes. The combination of colors and which sleeve they were worn on changed from day to day, just like code words, as a way of minimizing the risk of Red Army infiltrators.