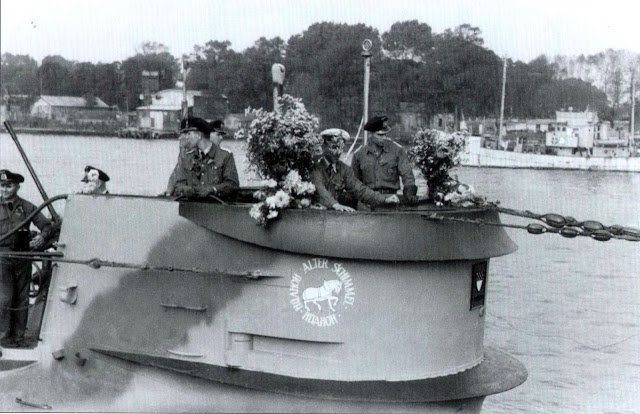 U-128, a Type IX C u-boat, was an extremely successful submarine attached to the 2. Unterseebootsflottille (2nd Submarine Flotilla) in Lorient. Built by Deschimag AG of Bremen, the boat was commissioned by Kapitänleutnant Ullrich Heyse on 12 May 1941. Heyse went on to achieve great success with this submarine in 1942 and early 1943. In the course of six patrols - of which the first was merely a transfer to Norway and the fifth is a seven-day radar trial - Ullrich Heyse and U-128 sank 12 ships totaling 83,639 GRT and damaged another! No wonder that the crew swore by their commander. The 35-year-old Berliner, a member of Crew 1933, knew how to lead his men. Once, on the boat, he pulled a knife from his pocket and sat down to help several of his men peel potatoes. Then, as he peeled, he discussed all the popular topics with this small circle. On land the captain often joined his men for a beer, which further strengthened the bonds with his crew. Before the war Heyse had served on merchant vessels, and as a submarine commander it was difficult for him to now have to sink such ships. In several cases he provided survivors with food, cigarettes and rum and expressed regret for having sunk their ship! Under Heyse, the boat wore a slightly modified version of the emblem of Ulm, U-128's sponsor city on the front of the conning tower, plus a white horse emblem on both sides. Encircling the horse were the words "HÜAHOH HÜAHOH ALTER SCHIMMEL" (secara harfiah berarti: "Hieh Hieh Kuda Tua"). As our drawing depicts, in the summer of 1942 the boat was camouflaged pale gray with dark grey longitudinal stripes. One of the stripes ran from the turret mantle aft to beneath the Wintergarten platform. All of the upwards-facing parts of the boat were painted black as per directives. Six days after completing his sixth patrol, on 21 January 1943, Heyse was awarded the Ritterkreuz des Eisernen Kreuzes (Knight's Cross of the Iron Crosses). In March 1943 he handed the boat over to Oberleutnant zur See Hermann Steinert. Luck deserted him on his very first patrol, however. On 17 May 1943 US Naval aircraft bombed the submarine near a convoy and forced it to surface. The boat sustained heavy damage in further attacks and was unable to dive. With the destroyers USS Jouett and USS Mofett closing in, Steinert ordered his crew to abandon ship. The leading engineer initiated the scuttling procedure, but the submarine was sunk by gunfire from the destroyers. The USS Mofett rescued 51 members of U-128's crew, four of whom died aboard the destroyer. 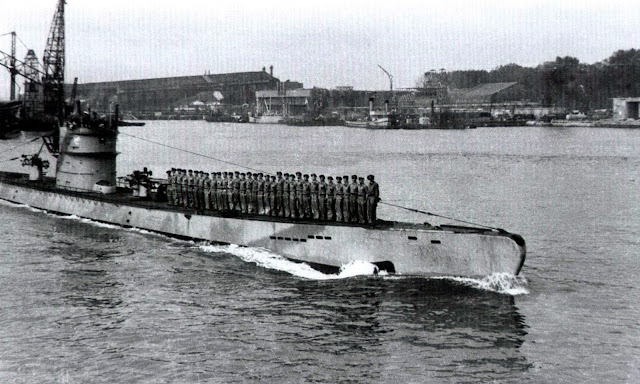 This photo (and the first photo above) depicts U-128, probably as it departed Lorient on its fourth patrol on 25 April 1942. The boat emblem and the coat of arms of the sponsor city of Ulm my be seen on the conning tower. Under Kapitänleutnant Hermann Steinert the boat also wore the Olympic rings of Crew 1936 on the conning tower.

Two Luftwaffe Instructors with Their Charges During Training 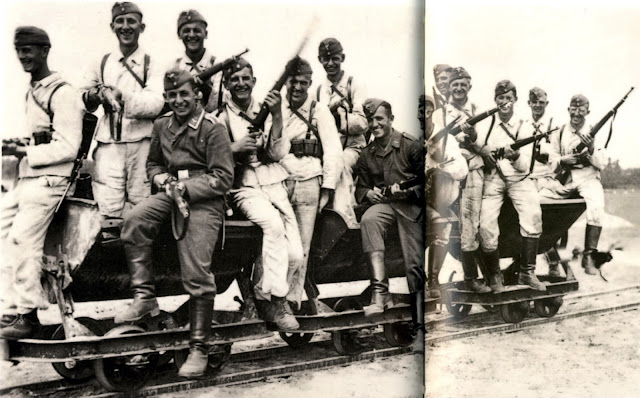 Two Luftwaffe instructors with their charges during initial training. The recruits are wearing white denim clothing, which was popular both on land and for general work aboard ships. The trucks on which they are sitting were quite common at the time. They were used on building sites, quarries and other places where heavy loads had to be moved. The tracks were often laid temporarily along the roads to overcome the problem of carrying heavy loads over soft ground or rough cobblestones. Heavy loads were still moved by horses and carts until some time after World War II. Lorries composed only a tiny fraction of the traffic on roads, many of which were unsurfaced tracks - even the more busy highways were covered with bumpy cobblestones. The vast majority of modern, tarmac surfaces did not appear on the continent of Europe until long after the war.


Source :
Book "Wolfpacks At War: The U-Boat Experience In WWII" by Jak Mallmann Showell
Posted by Alif Rafik Khan at 6:04 PM No comments: 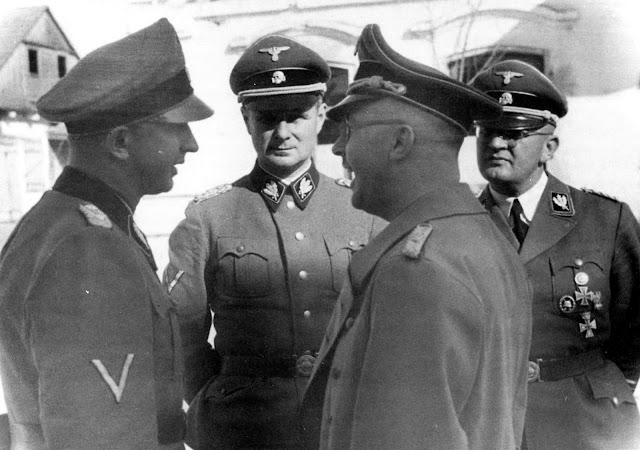 Karl Wolff is second from the left in this 1941 photo taken in Russia. On the far left is Hermann Fegelein (then commander of the SS Kavallerie-Brigade) and on the far right is HSSPF Erich von dem Bach. Heinrich Himmler is speaking to Fegelein. Born in Darmstadt on May 13, 1900, Wolff joined the Army in April, 1917, and ended the conflict as a Leutnant in the infantry having won both classes of the Iron Cross. He served in the Freikorps during 1919 as a company commander then left the Army in May, 1920. After studying law and political economics he worked as a bank clerk, then ran his own advertising agency until it dissolved in 1931. Joining the NSDAP and SS on October 7, 1931, he first served with the 2./11./1 .SS-Standarte. On January 19, 1932, he took command of his Sturm until mid- September, 1932, and was commissioned as an SS-Sturmfiihrer on February 18, 1932. From September 20, 1932, to mid-March, 1933, he was adjutant of the IUI. SS-Standarte and was promoted to SS-Sturmhauptführer on January 30, 1933. /4.v adjutant to Franz Ritter von Epp (then Reich Commissioner for Bavaria) he served from mid-March to mid-June, 1933, and attended the first SS course at the Reich Leader School during Februar)1, 1932. Promoted to SS Sturmbannführer on November 9, 1933, and to SS-Obersturmbannführer on January 30, 1934, he was Himmler's personal adjutant from March, 1934, to November, 1935. He then was upgraded to Himmler's chief adjutant as well as being chief of Himmler's personal staff after that command was combined with the post of chief adjutant in November 1936. Holding this combined assignment until until June, 1939, he was also a member of the Reichstag from March, 1933 to May, 1945. Promoted to SS-Standartenfiihrer on April 20, 1934, to SS-Oberführer on July 4, 1934, to SS-Brigadeführer on November 9, 1935 and to SS-Gruppenführer on January 30, 1937, he was Chief of the Personal Staff Main Office from June, 1939 to May, 1945 but a designated deputy commanded in his place after February, 1943. On May 3, 1940, he became a Generalleutnant der WaJfen-SS. Promoted to SSObergruppenfiihrer und General der Waffen-SS on January 30, 1942, from August, 1939, to February, 1943, Wolff served as Himmler's liaison officer in Hitler's headquarters and then became HSSPF "Oberitalien West. " When that post expanded he became the HöSSPF "Italien " in September, 1943. He was also military governor for northern Italy from February to October, 1943 and official representative for the Wehrmacht in Italy from August, 1944, to May, 1945. From February to May, 1945, he was titular commander of the 29.Waffen-Grenadier-Division der SS (italienische Nr. 1) though actual command was undertaken by his chief of staff (and later his deputy). Among his awards were the Gold Party Badge, the Olympic Games Decoration 1st class, both classes of the Iron Cross, the Reich's Sports Badge in Silver, the War Service Cross with Swords 1st class, the Social Welfare Badge and finally the German Cross in Gold awarded on December 9, 1944. A natural diplomat, he endured Himmler's abuse and acted as a buffer between his chief and the numerous personalities around him though he himself made enemies including RSHA Chief Ernst Kaltenbrunner. He incured Himmler's wrath when the latter refused to grant his divorce, Wolff then obtaining permission directly from Hitler. Wolff prevented implementation of the scorched earth policy in Italy and later testified at the Nuremberg Trials. Arrested in 1962, he served a term in prison from 1964 to 1971 for transporting Italian Jews and died in Rosenheim on July 17, 1984. (National Archives). 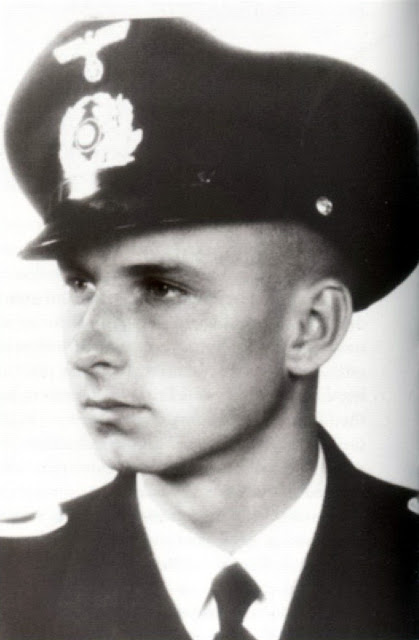 Oberleutnant zur See Hans Hellmann was born on 8 March 1921 near the Polsih border, became a U-boat commander, and was murdered in Bremen just before the end of the war by an irate husband, who felt he had become too intimate with his wife! Naval authorities took a strong stand against men having affairs with married women, and before the war the punishment was instant dismissal. However, other authorities within the Third Reich did not consider such conduct too bad. Indeed, one such disgraced naval officer, Reinhard Heydrich, took a commission in the SS and became one of their powerful figure!

Book "Wolfpacks At War: The U-Boat Experience In WWII" by Jak Mallmann Showell
Posted by Alif Rafik Khan at 8:40 PM No comments: