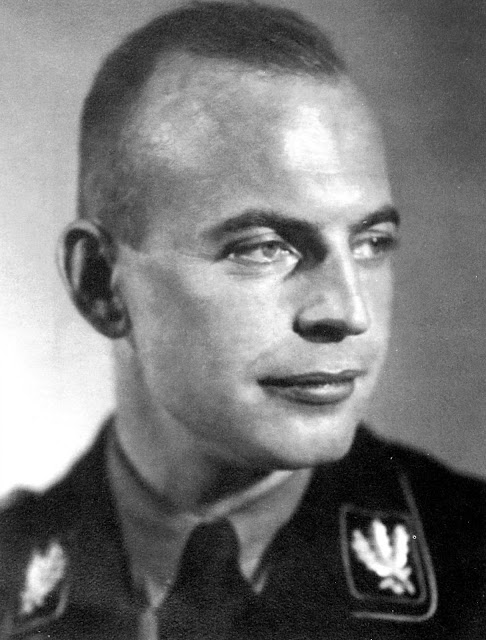 Hans-Adolf Prützmann was born on August 31, 1901, in Tollkemit, East Prussia. He worked as a farmer and entered local politics, serving as a senator for East Prussia. On August 12, 1930, he joined the SS and first served with SS-Sturm 24. Commissioned as an SS-Sturmführer on November 10, 1930, he became adjutant of the 30.SS-Standarte in late March 1931 and was promoted to SS-Sturmbannführer on August 3, 1931. In August, 1931, he moved to the 19.SS-Standarte as administrative officer then took command until early September, 1932 during which time he was promoted to SS-Standartenführer on January I, 1932. From late August, 1932, to mid-December, 1933, he commanded the 18.SS-Standarte and was promoted to SS-Oberführer on June 26, 1933, and to SS-Brigadeführer on November 9, 1933. He was a member of the Reichstag from April, 1938, until the end of the war and also led Abschnitt X from mid-July to mid- November, 1933. Prützmann took command of Oberabschnitt "Südwest" in mid-November, 1933, and left that command at the end of February, 1937, during which he was promoted to SS-Gruppenführer on February 28, 1934. He commanded Oberabschnitt "Nordwest" (which became "Nordsee") and was HSSPF "Nordsee" from June, 1938, to May, 1941. He was then officially HSSPF "Nordost" and commander of the area Oberabschnitt until the end of the war but was in Russia and his duties were undertaken by substitutes. In Russia he served as the HSSPF "Rußland-Nord" from June to November, 1941, and then changed posts with Friedrich Jeckeln and became the HSSPF "Rußland-Süd" until mid-March, 1944. Becoming a Generalleutnant der Polizei on April 1, 1941, and promoted to SS-Obergruppenführer und General der Polizei on November 9, 1941, from October, 1943, to September, 1944 he was the also the HöSSPF "Ukraine." In June, 1944, he became Himmler's liaison officer with the Oberkommando der Wehrmacht (Armed Forces High Command) and for all of 1945 he also was Inspector of special guerrilla units ("Wehrwolf"). He became a General der Waffen-SS on July 1. 1944, and during the final weeks of the war served with the Dönitz government as Himmler's representative. He was awarded the Gold Party Badge, the Iron Cross 2nd class in 1941, the Iron Cross 1st class in 1943, both classes of the War Merit Cross with Swords and the German Cross in Gold on June 16, 1944 for leading Kampfgruppe "Prützmann" in Russia (composed of Ordnungspolizei and foreign units under his command). His German Cross recommendation was personally submitted by Himmler. Prützmann was cultured, creative, a talented organizer, and was feared by subordinates. His command in Russia was also brutal and resulted in the deaths of more than 360,000 people from August to October, 1942 alone, more than the totals for several of the Einsatzgruppen in Russia. Captured by the British, he committed suicide on May 21, 1945.


Source :
"Allgemeine-SS: The Commands, Units and Leaders of the General SS" by Mark C. Yerger
Posted by Alif Rafik Khan at 6:25 PM